Right and Wrong / Truth and Error 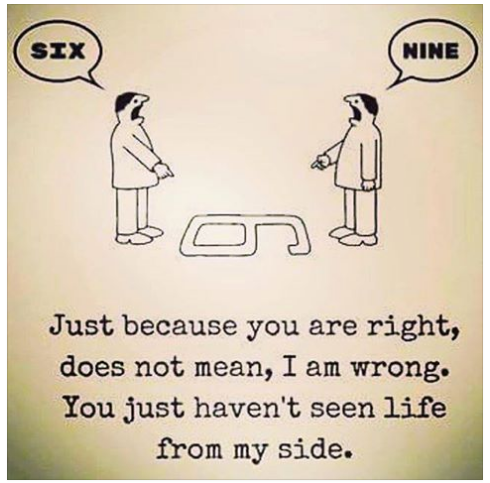 A friend on Facebook posted this image a few days ago. It is a common thought in today’s “everyone is OK” world. Sure, everyone is coming from varying backgrounds, we all have different baggage that we bring to situations in life. And there is certainly an element of truth in the “until you’ve walked a mile” clichés, however, that doesn’t mean everyone is right and no one is wrong. Truth is not fluid concept that change from person to person. It is absolute. It is consistent.

Let’s suppose the number lying on the ground between these two people is on a cheque and you are depositing it at the bank. It’s a cheque for $999, but the teller insists that she will only put $666 into your account. Though you see  9s on the cheque, she sees 6s. Are you willing to suffer a $333 loss rather than tell her she is wrong?

What is missing in this image is the context. It may appear to be either one, and both answers seem equally plausible. If we have no context in which to consider the number, an argument could be made for either 6 or 9. However, if we lay a 7 and an 8 in line with the digit there, we will know for certain whether it’s a 6 or a 9. The truth is, one of those fellas, despite being 100% convinced that he is right, is actually looking at the number upside-down, and is therefore wrong. Perception and truth are not the same thing.

All religions must be tolerated… for every man must get to heaven in his own way.1

And consider how arrogant it is to think that we can simply find our own way to heaven. Those who take such a position thumb their noses at God, telling Him to open the door and grant entrance to heaven, not because we’ve done what God has commanded, but because God should simply accept us as we are.

I am the way, the truth and the life, no one comes to the Father except through Me. (John 14:6)

If Christianity is true, then there is no room for any other religious movement to be true. That may not sit well with some people, but it doesn’t make it any less true. If Jesus rose from the dead, then He is Lord, and His will alone is religious truth. It is imperative that people consider the evidence for the resurrected Christ, and if it be true, follow Him and Him alone.

Let me say a few words about the religious mess in what is generally referred to as Christianity. It is shameful that there is so much division. It is intolerable that folks not only tolerate but encourage  diversity from church to church in doctrine and practice. It’s foolish to adamantly affirm that Jesus is the only way, but then claim there are several ways to Jesus!

You shall know the truth, and the truth shall make you free. (John 8:32)

We need to be diligent students of truth. We need to study with a desire to learn what God says, not to prove ourselves right. We need to avoid preconceived ideas and biases. We need to rightly divide the word (2 Timothy 2:15). We need to accept it for what it says, and then do what it says.

This entry was posted in Faith, False Doctrines, Integrity, Truth. Bookmark the permalink.