What About the Thief on the Cross? 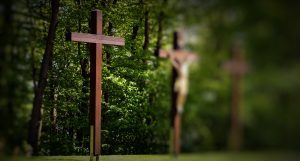 When faced with a Bible passage that plainly teaches the necessity of water baptism for salvation, many of our friends protest, “But what about the thief on the cross? He was saved forty feet above the high water mark! He never got his big toe wet! I want to be saved just like the thief on the cross!” Surely this unnamed malefactor must be the most popular criminal who ever lived!

The story of the thief on the cross is found in Luke 23:32-33, 39-43. “There were also two others, criminals, led with Him to be put to death. And when they had come to the place called Calvary, there they crucified Him, and the criminals, one on the right hand and the other on the left… Then one of the criminals who were hanged blasphemed Him, saying, ‘If You are the Christ, save Yourself and us.’ But the other, answering, rebuked him, saying, ‘Do you not even fear God, seeing you are under the same condemnation? And we indeed justly, for we receive the due reward of our deeds; but this Man has done nothing wrong. Then he said to Jesus, ‘Lord, remember me when You come into Your kingdom.’ And Jesus said to him, ‘Assuredly, I say to you, today you will be with Me in paradise.’”

Since Jesus promised him, ‘Assuredly, I say to you, today you will be with Me in Paradise,’ the malefactor was indeed saved. Does his salvation nullify the necessity of water baptism for the remission of sins?

In order to answer affirmatively, one must answer “yes” to three questions. Please consider each one.

(1) Does this one case nullify the plain teaching of Jesus Christ and His inspired apostles? The Lord certainly taught that baptism is a condition of salvation: “He who believes and is baptized will be saved; but he who does not believe will be condemned” (Mark 16:16).

His apostles plainly proclaimed the same truth: “Then Peter said to them, Repent, and let every one of you be baptized in the name of Jesus Christ for the remission of sins; and you shall receive the gift of the Holy Spirit” (Acts 2:38)

Since the word of God is truth (John 17:17), it does not contradict itself. Does this case contradict the precepts of the Lord and the apostles?

Furthermore, Jesus “made and baptized more disciples than John” in the same region (John 4:1-3). The thief knew Jesus was Lord (Luke 23:42). How did He know that if He had not heard John, Jesus, or His disciples preach? Why did he call Jesus “Lord” if he was not a disciple? Are you sure the thief was not baptized? The burden of proof is on the one claiming him as an example of salvation without baptism. Are you willing to risk your soul on it?

(3) Is the salvation of the thief on the cross a pattern for our salvation? We live in the New Testament age (Hebrews 9:13-15). The New Testament did not acquire force until after Jesus died on the cross (Hebrews 9:16-17). The Lord blessed the malefactor with the promise of paradise as they both hung on crosses, before the death of Christ. The conditions of salvation were different at that time. For example, we must believe in the death, burial and resurrection of Christ to be saved (1 Corinthians 15:1-4), but no one could believe these facts before Jesus’ resurrection.

The answer to all three questions is “No.” No, the salvation of the thief on the cross does not nullify the necessity of water baptism for the remission of sins.

But what if the Lord had made an exception for the thief on the cross? As the Master told Peter, when Peter asked about John, “If I will that he remain till I come, what is that to you? You follow Me” (John 21:18-22).

Friend, stop quibbling about the Lord’s commands and obey Him. “But why do you call Me, Lord, Lord, and do not do the things which I say?” (Luke 6:46). “And now why are you waiting Arise and be baptized, and wash away your sins, calling on the name of the Lord” (Acts 22:16).