Mr. Melton mentions 1 Peter 3:21, and just as quickly as he refers to it, he discounts it and moves on. He says of baptism, “…it is a figure, not a doctrine.” It is a doctrine. Doctrine simply means teaching, and the New Testament teaches about baptism a lot. And 1 Peter 3:21 doesn’t merely say baptism is a figure, it says it is “the like figure.” The Greek word here is antitupos, from which the English antitype has been transliterated. It means “after a true likeness” (Robertson’s NT Word Pictures) or “corresponding (antitype), ie. a representative, counterpart” (Strong’s). The concept of type and antitype is used frequently between the Old and New Testament. There are several Old Testament types of Christ (ie. Melchizedek, Isaac, Moses, Joshua, etc.). There are key elements about each of these (and others) which serve as foreshadows of the Messiah. Jesus is not just “a figure” of these Old Testament examples; He is the true fulfillment, He is the antitype. The same word (antitupos) is used in Hebrews 9:24, where the Old Testament tabernacle and sacrifices are identified as types or “copies of the true.” The church and the sacrifice of Christ are the true. In the same fashion, Noah’s salvation through water (1 Peter 3:20) was the type, the foreshadow; whereas our salvation through water (verse 21) is the true.

Aside from his misapplication of “the like figure,” Melton has nothing else to say about 1 Peter 3:21. He cannot get around what it says, so he ignores the text. Notice what Peter wrote by the Spirit of God, “There is an antitype which now saves us—baptism (not the removal of the filth of the flesh, but the answer of a good conscience toward God), through the resurrection of Jesus Christ.” Peter specifically says baptism saves us; Melton simply ignores the statement. Baptism alone? Of course not. Noah wasn’t saved through water alone. Had he not believed God and obeyed, he would have perished like the rest. Likewise, we are not saved through water alone; we too must believe God and obey Him. But the fact remains, Peter identifies baptism as the point of salvation (just as he did in Acts 2:38).

Moving on to Romans 6:3-4 and Galatians 3:27, Melton says, “…there is no WATER baptism in either…” Thus he concludes these texts are about “…the SPIRITUAL baptism of 1 Corinthians 12:13…” It is true, the word “water” is not found in either text. If the absence of the word “water” means it is not water baptism; by the same token, would the absence of the word “spiritual” not likewise mean it is not spiritual baptism? 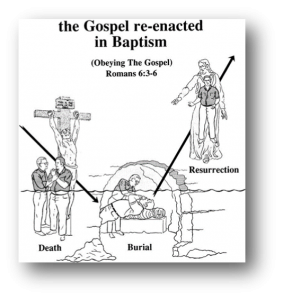 Melton was right to group Romans 6:3-4 and Galatians 3:27 together, for what one speaks of, the other speaks of. Both use the phrase “…baptized into Christ…”, and as we have just noted, water baptism fits the text. There is no reason to think Galatians 3:27 is not also about water baptism. In fact, the word baptism or some variation of it appears about 80 times in the New Testament. It means to immerse or submerge. It is true the word is used figuratively at times (ie. baptism of suffering, Matthew 20:22; Holy Spirit baptism, Mark 1:8; baptism into Moses and the sea, 1 Corinthians 10:2)., but by far, the most common use of the word is immersion in water. Basic Bible hermeneutics would have us understand a word by it’s common usage, unless something in the text demands otherwise. Nothing in Romans 6:3-4 or Galatians 3:27 demand that baptism be anything other than immersion in water.

Melton closes his assault on what the Bible says about baptism by citing Paul’s statement in 1 Corinthians 1:17, “…Christ sent me not to baptized but to preach the gospel…” Why did Paul say that? The context reveals a spirit of sectarianism in the church at Corinth. Paul was thankful he only baptized a few of them, “…lest anyone should say that I had baptized in my own name…” (v 14-16). He is not saying baptism is not necessary, as Melton tries to infer from the text. But, the fact is, no one is sent to baptize. Baptism results from the preaching of the gospel. Look through the conversion accounts in the book of Acts, and you will see consistently that those who heard and responded favourably to the gospel did so by being baptized.

Melton appeals to 1 Corinthians 15:1-4, which reveals the gospel as the death, burial and resurrection of Christ. He quickly points out “…the subject of water baptism isn’t mentioned once.” True. But, may I point out, the subject of repentance isn’t mentioned once either. Will Melton affirm that we can be saved without repenting? (see Luke 13:3, 5; Acts 3:19; 17:30-31) The absence of repentance or baptism in a particular text does not negate the fact that they are both mentioned several other places in connection with salvation.

Melton has done his best to discredit the churches of Christ in his lengthy article, unfortunately by peddling a lot of misinformation and misrepresentation. I challenge readers to consider what is written in his material, and the responses given here; but especially to focus on what God’s word say. It doesn’t matter what any preacher says, whether Mr. Melton, myself, or another—it matters what the Lord says. Be like the Bereans and search the Scriptures to see whether these things are so (Acts 17:11). If I have failed to be honest in my use of God’s word, please be a friend to me and point it out. The salvation of souls is too important to be playing around with. May we all be diligent students of the Bible, setting aside bias and simply accepting what the Lord would have us do.

______________________________
NOTE – It has been brought to my attention that the article which was formerly at av1611.org by James L. Melton is no longer on the site. Reading the response to an article but not having access to the original writing can be frustrating. Having the context of quotes is important. If you would like to read the original article for yourself, contact us by email and we will get a copy to you.