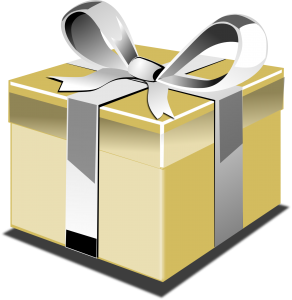 The Christmas holidays are an exciting time for children of all ages. It affords us the opportunity to get together with family and friends, to share time and good food, and to give and receive gifts.

Are you aware that the idea of giving gifts can actually be found in the Bible? It is not related to Christmas, but in Esther 2:18, we’re told King Artaxerxes “…proclaimed a holiday in the provinces and gave gifts according to the generosity of a king.” Approaching the end of the same book, after the Jews were saved from the destruction Haman had planned for them, Mordecai proclaimed the 14th and 15th days of Adar to be a holiday for the Jews, for they had rest from their enemies. It was to be a time of joy and feasting, and “…of sending presents to one another and gifts to the poor” (Esther 9:20-22). Again, this has nothing at all to do with Christmas, but simply shows that the giving and receiving of gifts is a long beloved activity.

The word gift actually occurs several times in the Bible. Many of these times it is about what the Lord gives to us. For  instance, in Ecclesiastes 3:13 and 5:19, the physical blessings we enjoy daily are referred to as “…the gift of God.” James 1:17 concurs, acknowledging that “every good gift and every perfect gift is from above” But as great as the physical blessings of God are, He has even greater gifts for His people.

In Acts 2:37, after hearing they had crucified their Messiah, the Pentecost crowd asked what they should do. Peter  told them to turn from sin and be baptized for forgiveness, and “you shall receive the gift of the Holy Spirit.” Later, the apostle Paul would write to the church at Rome, describing the “free gift” of salvation which is by the grace and mercy of God in Jesus (Romans 5:15-18). In 6:23, he would contrast the wages of sin, which is death, with the gift of God, which is eternal life in Christ Jesus.

In his second letter to the church at Corinth, after speaking about the giving of material goods and offering of prayer for one another that should characterize God’s people, the apostle wrote: “Thanks be to God for His indescribable gift!” (2 Corinthians 9:15). As needful and good as the things we do for one another are, they are small when compared to the greatness of God’s gift to us—eternal life through His Son, Jesus Christ.

Paul described the gift of God at length in the Ephesian letter. We had no hope, but in Christ, we now have the gift of salvation from sin and the hope of heaven. Have you received the free gift of God?

When you opened the boxes from under the tree, you didn’t earn the gifts inside. They were still gifts. Similarly, you must do something to receive the gift of God, but by doing something, you do not earned it. It remains a gift.

This entry was posted in Benevolence, Family, Gifts, Jesus, Salvation. Bookmark the permalink.