RESPONSE:
Did Moses in back-to-back verses contradict himself? Granted, the wording of the verses can cause some confusion, but that doesn’t mean they are in contradiction. Consider a possible explanation. 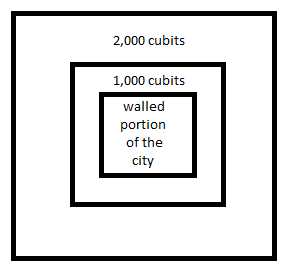 The end result would be an extension from the city walls (ie. the center of the town, the “business area” if you will) outward for 3,000 cubits. It could be the first 1,000 cubits were given for them to build homes in, whereas the remaining 2,000 cubits were for fields, vineyards, grazing of their animals, etc.

Keep in mind, the Levites were not given land as the rest of the tribes were. This sparse bit was given to them to live on. So the reader may understand how small this area was, 1,000 cubits is approx. 1/2 km or 1/3 mile. It was just enough space around the city to live, have small fields and vineyards.

There is no contradiction.

A response to 1001 Bible Contradictions.

This entry was posted in Answering The Atheist and tagged contradiction, land, Levite, suburb. Bookmark the permalink.