God Only Needs One Stone 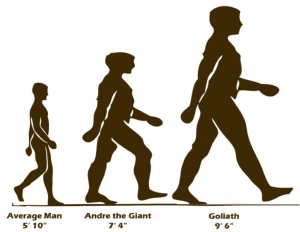 Goliath, the Philistine giant, challenged Israel to produce a champion to fight him one on one. The loser’s people would serve the victor’s nation (1 Samuel 17:8-10). Israel did not send out a man, rather they “were dismayed and greatly afraid” (1 Samuel 17:11).

David was too young to be in the army, but his oldest three brothers were there. Jesse sent David to his brothers and the captains of the men with provisions (1 Samuel 17:13-18). The giant issued his challenge again after David arrived in the camp, and the young man heard it. He was enraged that this “uncircumcised Philistine … should defy the armies of the living God” (1 Samuel 17:26). Not long after, he was before the king, and confidently declared, “Let no man’s heart fail because of him; your servant will go and fight with this Philistine” (1 Samuel 17:32).

Saul tried to discourage him. You’re too small. You’re too young. Your too inexperienced. But as David explained to Saul why he believed he could take the giant down, it had nothing to do with his size, his age or his experience.

The king tried giving David his armor, but he refused. Since Saul was head and shoulders above all others in Israel (1 Samuel 9:2), the armor would have been more a hindrance than a help. Plus, David’s confidence wasn’t in the tools of warfare, but in the God of Israel. Notice what he said to the giant before he slew him:

You come to me with a sword, with a spear, and with a javelin. But I come to you in the name of the LORD of hosts, the God of the armies of Israel, whom you have defied. This day the LORD will deliver you into my hand … then all this assembly shall know that the LORD does not save with sword and spear; for the battle is the LORD’s, and He will give you into our hands. (1 Samuel 17:45-47)

He was able to stand before this monster of a man because he trusted in the LORD, not himself. What an exceptional example for us when the Goliaths of life stand in our way and challenge our faith. The battle is the LORD’s, and He will give us victory if we will stand in faith and not shy away in fear (Psalm 44:6-7).

As great as David’s faith was, I want you to notice something. In verse 40, he took his staff, his sling, and count them, 1-2-3-4-5 smooth stones. David felt that 5 stones would be sufficient. Some of us may have grabbed up every stone from the brook and still felt as though we didn’t have enough. But God only needed one stone.

The apostle Paul wrote about the LORD and his ability:

[He] is able to do exceedingly abundantly above all that we ask or think, according to the power that works in us… (Ephesians 3:20)

The LORD is more than able. He is able, whether we take 1 stone or 5, to give victory. David’s faith was in God’s ability, not his own. He brought the stones and the sling, but God gave the victory. Let us pick up our stones and confront the giants we face in life, confident in the LORD God. All He needs is one stone.

This entry was posted in Faith. Bookmark the permalink.