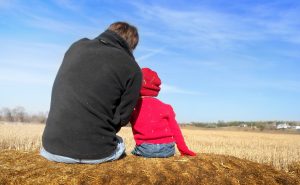 There is no shortage of fathers in the Bible. Certainly not every man we read of on it’s pages was a father, but I suspect the vast majority were. Doubtless, there are plenty of lessons we can learn, both good and bad from the fathers recorded in Scripture. Let’s note a few today.

Adam: teach them to know & serve God
There are a lot of firsts linked to Adam. Not only was he the first man, but he was the first husband and father. Nothing about his relationship to his children is recorded, but perhaps we can extrapolate from what we know of his sons. In Genesis 4, when we are introduced to Cain and Abel, we find both sons bringing sacrifices to the LORD. Granted, the LORD did not receive Cain’s offering (we’ll consider why another time), but both had been taught to offer sacrifices to God. In Proverbs 22:6, Solomon wrote:

Train up a child in the way he should go, and when he is old he will not depart from it.

Of course the proverb is a generic truth. A child is free to choose his own course (as Cain did), but it is evident that Adam had instructed his sons about serving God.

Fathers, teach your children about God.

Noah: teach them to faithfully obey God
The thing Noah is best known for is that he built the ark. Why did God choose Noah and not someone else? Genesis 6:9 says he was just, perfect and one who walked with God. This set him apart from everyone else. Further, the Bible tells us that when God told Noah what to do, he did it exactly how God told him to (Genesis 6:22; 7:5). In this, Noah was a great example to his sons.

Fathers, teach your children to obey God in all that He commands.

Job: the watchful father
One of the outstanding details about Job’s relationship with his children is his propensity to be aware of their activities, and that he would direct them to sanctify themselves, and prepare offerings for them (1:5). He was concerned for their spiritual welfare, and made it his business to watch out for their souls (contrast that with the “am I my brother’s keeper” of Cain).

Fathers, take an active role in the ongoing spiritual welfare of your children.

Abraham: loving God most
Maybe the most difficult demand made of a man in the Bible is when God commanded Abraham to offer Isaac as a burnt offering (Genesis 22:2). It is a command I suspect most fathers would refuse. And yet in the next verse, we find Abraham beginning the 3 day trek to Moriah with his son, ready to do as God commanded. It is not that he didn’t love Isaac; we know he did.. He was their miracle baby, born to Sarah after she was beyond the age of child-bearing. He was the son of promise. And yet as they scaled the mountain of the Lord’s choosing, he was as good as dead. How could he? Why would he? He had faith that God would raise his son from the dead (Hebrews 11:17-19). He knew God to be a Keeper of His promises—always. His son learned that day God comes first, even before family.

Fathers, teach your children that God comes before all else.

Joshua: we will serve the LORD
Perhaps the most monumental statement from Joshua comes in his final address to Israel. He calls upon the people to choose whom they will serve, whether the pagan gods or the LORD. Make a choice! As the leader of his household, he had made the choice for his family, “as for me and my house, we will serve the LORD” (Joshua 24:15).

Fathers, make it clear that your household belongs to God.

There are several other great examples of fatherhood to see in the Bible. There are also some bad examples. We’ll close with a few quick examples of what not to be as fathers. Don’t be like: